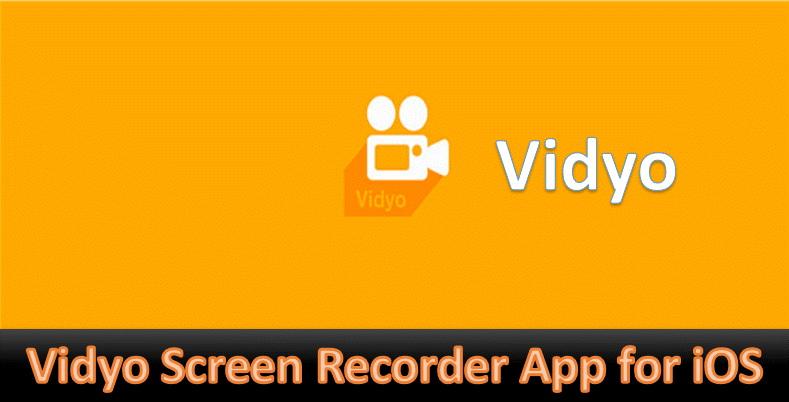 Vidyo Screen Recorder is a very popular screencast tool for the iPhone/iPad that amassed fame from the moment it was made available on the Apple App Store. How good this app is has been evidenced by the 5 Star Ratings on most of the consumer-centric review sites. Vidyo will not only help you to record the screen but also comes with extra features like the ability to avail a built-in video editor to a user after recording. Vidyo will sort you out in case you need to make a screen video recording and your device does not come with a built-in screencast feature.

Contrary to some other screencasting apps that do not work on iPhone/iPad out of the box without some changes to the device, Vidyo will work without the need for a jailbreak or any other kind of change to the device iOS system. Better yet, Vidyo comes free of charge so when you want to download and install, no charges whatsoever will be incurred. What makes Vidyo really tick? Is it the best screen recorder app? All these questions and more that you may have will be answered by the time we are done with this review article. Let us see what Vidyo has to offer to win. 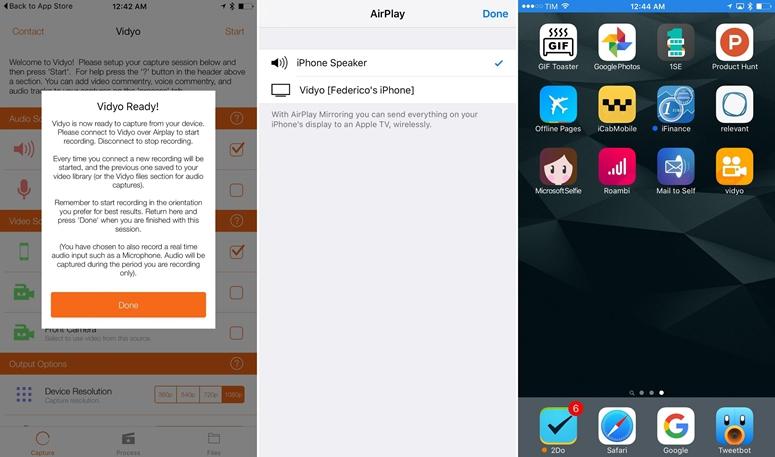 As the main function for every screencast app, Vidyo is able, for starters, to make sure you can capture the screen footage even before you can have access to extra options. Basically, you will be able to record a video of whatever content is displayed on the screen including gameplay, a presentation, an app review, and any other content you as the user would like to have recorded for later sharing.

Please note that you have to select screen to be captured on the app before starting the capture process or else you will not have any video screen record afterward. For best results, you are advised to start recording the screen of your iOS device in the orientation of choice be it portrait or landscape. 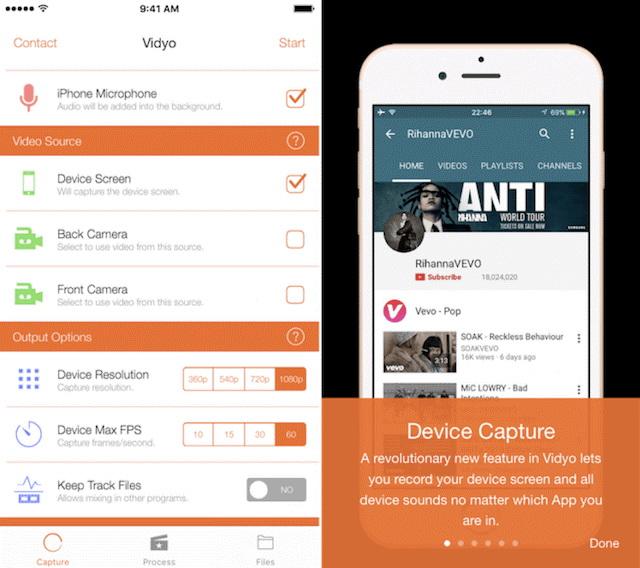 When you have opted to record a video, the output quality will determine how easy or hard a viewer will find it to make out stuff on the screen. Thanks to Vidyo, even before you can start recording, you are able to preset the resolution and frame rate of choice to work with. In terms of resolution, you can choose from 360p, 540p, 720p or the highest one of 1080p.

When it comes to the frame rate, several frame rates are provided including 10fps, 15fps, 30fps and ultimately 60fps. FPS stands for frames per second for those of us who may not know the acronym. When you combine 1080p and 60fps, you are guaranteed to have the best output. In fact, that is the advised combination when using Vidyo.

Unlike other apps that lack this handy feature, Vidyo enables you not only to record the screen but also the cameras. Depending on what is to be captured, you can record footage from the front or back camera. This is one of the features that really make Vidyo superior in its functions. 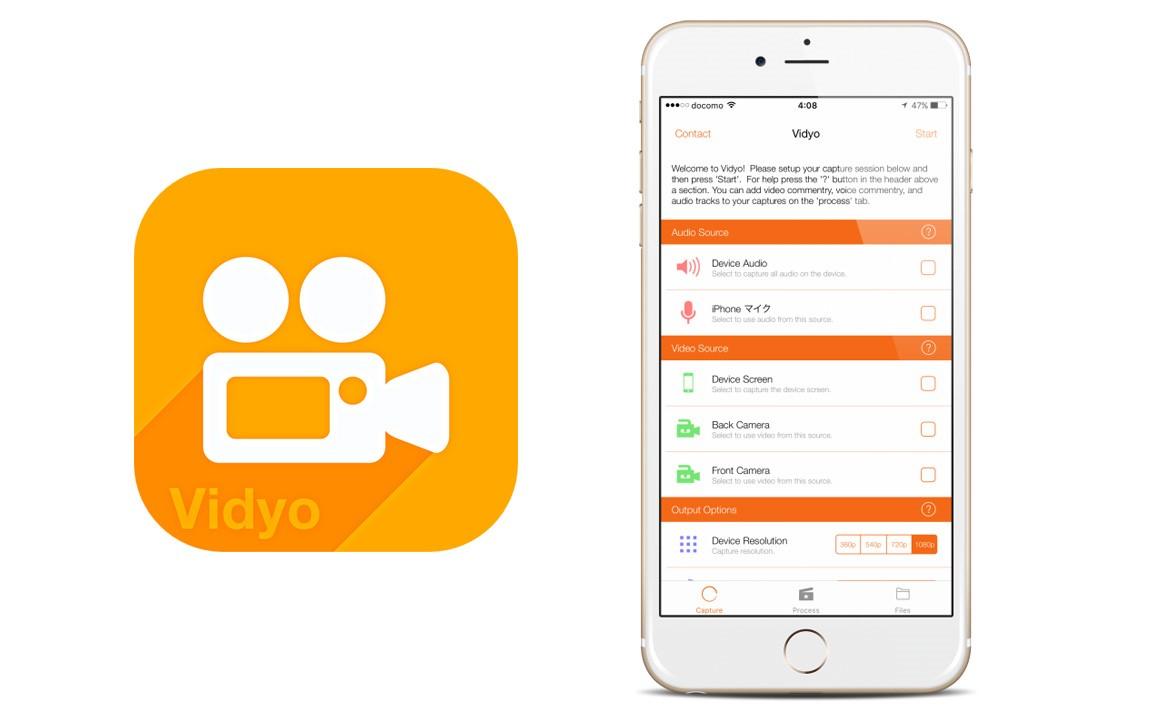 This review cannot fail to recognize this awesome feature from Vidyo. Audio forms an integral part of videos by providing extra information that a video is not capable of. Vidyo is able to capture audio using the built-in iPhone/iPad microphone, therefore, managing to record narration from the user, verbal reactions or even voiceovers that are coming from the external environment.

This will add information to your video on top of ensuring that the video does not become overly silent and boring. The best thing about being able to record the iPhone/iPad screen with audio is that it is more convenient compared to when you have to capture the same audio and video on different platforms then later combine the two with an editing tool.

On top of that, Vidyo comes with another nifty feature whereby it is uniquely able to record internal audio in the best quality possible. This kind of audio can be from games being played or music players that is needed in the final output.

The video utilizes a background audio recording feature so you may not hear sound coming from the device but back there, the sound is being recorded in the best and clearest quality possible. Do not feel like Vidyo screen recorder is faulty if you opt to record sound then you do not hear it during the screencasting process. Just like screen recording, you have to tick the necessary audio capture options before you start the screencast.

Video editing allows us to tinker with the recorded video to enhance it further and make sure it comes out in an intended way. Vidyo has a video editor built into it so you have access to several video editing tools without having to leave the app. For instance, if the captured video is longer than required, a trimming feature is available to have just the length of choice.

In case you need to add external video commentary, voice commentary and other audio tracks to the original recording, all that can be done on the Process tab available on Vidyo app. Moreover, you will be able to play with the audio rate or the play speed for the video. Time scaling or timing range is another feature available on the editor that you can utilize as the need may arise.

Once you are done editing you have the choice of saving as a new file or applying changes to the original file. After that, you can share the final video file to any social platform of choice to reach your target audience.

There you have it. This Vidyo screen recorder review article has dived deep into what features you will enjoy from this app. I am sure the review has answered the questions that were asked initially in the best way. You will have no qualms when you make Vidyo your go-to screen recorder for your iPhone/iPad. Do you agree with me?