QuickTime Player is mostly known as a media player especially for the Mac OS X platform. But besides being a fully featured media player, it can also function as a screen recorder. With just a few clicks on the player, you will be ready to start your screen recording. However, QuickTime can only record the screen compared to fully-fledged screencasting software that can record the screen, the webcam and even both at the same time. 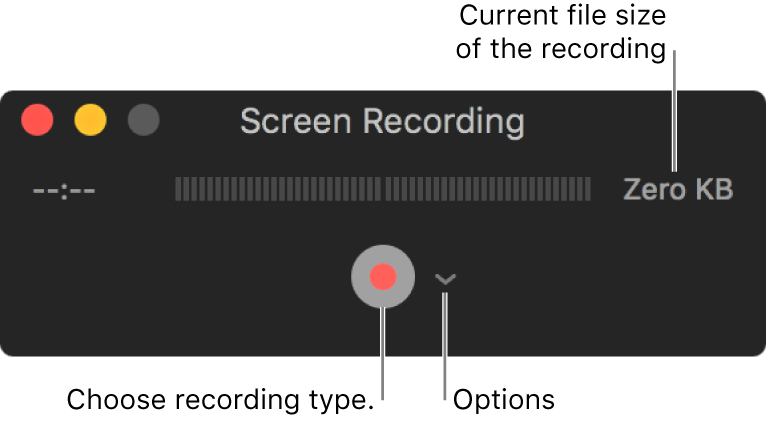 Getting started is pretty simple and straight forward. You just need to fire up QuickTime Player, navigate to the File menu and select New Screen Recording option. A simple and intuitive user interface will be displayed for you ready to start recording. On the interface are several options and indicators that allow you to get the best out of your recording.

The QuickTime Player recording window will show the elapsed time indicating how long the screen recording has been going on, the current file size of the already recorded content and increases in real-time as the recording continues, a button to choose the recording mode to use (full screen or region recording) and an options button to manage audio and mouse settings.

QuickTime has two recording modes. One is that you can record the whole screen and the other mode is where you drag the mouse to select a specific region on the screen to record. With this option, you will be able to select a browser window or even a specific application running on your Mac OS X and record whatever content that is displayed.

To start recording the whole screen, you need to click on the Record button then click once on any part of the screen. To begin recording a specific region, click on the Record button, drag the mouse cursor on the screen to select the region to capture and then hit Start Recording. These steps are easy to learn and execute even for a first time user since QuickTime does not have a steep learning curve when it comes to screen recording.

Audio capture options are also provided by QuickTime. If you need to add narration to your video, you can use the microphone to record your own voice. Better yet, if you have more than one audio capture device connected, QuickTime will let you choose the one that fits best for you.

You can also set the audio capture device to None if you do not need any audio included in your recording. This can come in handy if you just need a recording that you can later edit to include external audio to spice up the final video. You can just imagine how boring it would be following a video that has no sound at all. Some audio makes the video have some life in it.

Putting emphasis on certain areas of your recording is very crucial if you need your viewer to follow keenly and easily without having to struggle much. QuickTime brings you an option where you can show mouse clicks. Basically, what happens is that a during the screen capture process, the clicks appear as a circle enabling the viewer to easily identify areas that have been clicked.

When a viewer is able to follow the recorded video without struggling on identifying key areas of the video, the recording is able to achieve the goal of being as informative as possible. This is a feature that you may not find in some of the other fully-fledged screencasting software but QuickTime Player has given you at no extra cost at all.

I will start by pointing out that QuickTime does not autosave your recordings so after you have stopped the screencast process, the video will be open in the player ready for saving. This means that you have to save the file manually otherwise the file will be lost after exiting QuickTime. The recorded file is saved in H.264 QuickTime movie format and if you included audio, it is saved in AAC format. Also, do not forget to give an appropriate name and directory for your recording for easy retrieval when needed.

One the recording has been saved, you can leave the file locally on the hard disk or better yet upload it to your favorite platform where you can then have a shareable link. These platforms and services include Youtube, Vimeo, Google Drive among others.

The choice of which one to use greatly depends on your preference. Uploading the file to the cloud is even the better since it saves you on the local storage space if your recordings are huge. However, this requires you to have a good internet connection as these services only work online.

There is no doubt about QuickTime being a good screen recorder. It is a screencasting tool in its simplest form giving just enough to be able to record the screen and include narration from the microphone if need be. QuickTime is thus not just a media player for audio and video formats but also a tool that can help you achieve even more.

It may lack many features that you would want to see in a screen recording software but even at that, it does not fail to empower you with the basic screen recording features which for me are the ability to record the screen and have a choice of capturing audio too. Do not go through much hassle and trouble when you need to record your Mac OS X screen as QuickTime is just a click away.