Ezvid for PC is a Windows 10 screen video capture program that also doubles as a video editor. It can also function as a video creator for the case where you use pre-recorded videos. Ezvid has a different approach to what a screen recorder should provide to a user. Ezvid comes with a timeline on the main interface and a monitoring screen for that instant preview of recorded footage and fast editing. This is a feature that I have not yet seen in other similar functioning software.

To commence this Ezvid review, I have to point out that it can be very mysterious for a first time user. When you launch the software, you may wonder where to get started unless you play with the buttons that have familiar icons. Optionally, you can hover the mouse on icons and a description of what that specific button does will appear. What this means is that the learning curve may be a bit steep for anyone who has not interacted with a screen recorder before. But at the end of the day, you will be able to accomplish tasks.

Despite that, Ezvid still qualifies as a good screencasting tool as it has its own share of features that make it stand out. Read on to find out and explore what Ezvid has in store. 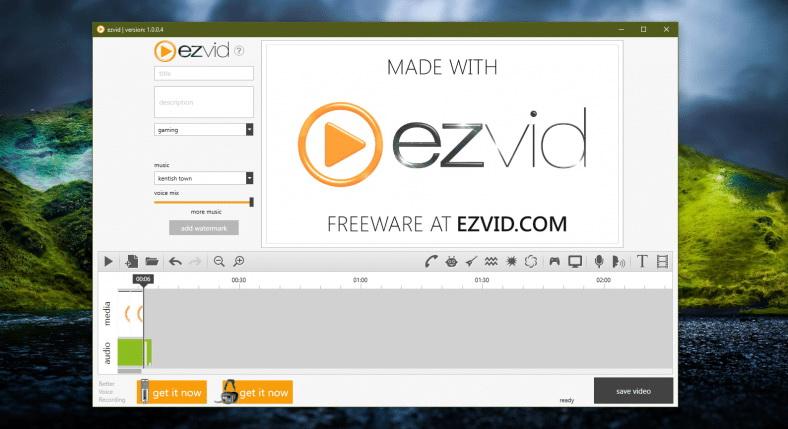 What Can Ezvid Capture?

The superiority of a screen recorder can be determined by what it is able to capture be it the screen, microphone, webcam, media devices and more. Ezvid will enable you to capture the following;

This is the first thing that any screen recorder is able to accomplish out of the box. Ezvid is able to let you record the whole screen y default when you opt to use the basic settings. However, when you opt to use advanced settings when recording the screen, a list of extra options are provided for you including;

When capturing the screen, you are empowered with a drawing tool that you can use to draw in real time on the video like for an instance when you have to point where a viewer should put their attention. With a single right-click, you are able to clear all drawings and start all over again.

You can record audio from the microphone independently and include it on the timeline on the go. You just need to position where to include the audio on the timeline, hit the voice recording button and you will be ready to record. On top of that, several preset voice FX options are provided to tweak your audio even more.

A ton of extra features come with Ezvid screen recorder. When starting the recording process, you are given an option to add a  title, description and appropriate category for the video for easy organization.

In the case where you do not want to record your own voice, you can include a text slide and use the voice synthesis feature that comes with Ezvid. This feature will read the text with computer voice making it seem like you said the words yourself. This is a perfect alternative to having to make narration on your own.

We have talked of Ezvid having a timeline where you can manage media (videos and images) and audio. The timeline is a special feature of this app that enables you to accomplish a lot. When dealing with videos, you are able to duplicate, delete, split and on the other hand adjust the speed of video during playback. On the same timeline, you are able to add multiple texts, local pictures, and videos that need to be included in your final project.

Music plays an important role in making a video catchy. Ezvid comes with a large list of music that can be used as background music for your video. It does not end at that as you are also free to include your own local music from the PC. Do not let your video get boring during certain intervals when you can have good music play in those instances.

Other similar software will include watermarks in the recording you make without you having a choice about it. Contrary to that, Ezvid lets you include any watermark of your choice. It can be a logo or your own picture depending on what you prefer to include.

Ezvid may not be the best screen recorder out there but it will not disappoint you in what it can achieve. Despite falling short in features like the ability to take screenshots, it will still be able to record your screen and webcam too. With this and more, you can decide whether to give a home to this wonderful software.