With this best PDF to excel converter, converting tabular data to excel has never been easier before the introduction of cogniview Pdf2xl in the market. There has been an increasing demand for the conversion of tabular data in pdf to excel by business people both operating in large industries and small industries.

From items such as price list compilation coming from different clients, bank statements, clients shipping addresses and much more that come in the pdf version, there is always a need to convert such to the excel format in order to make projections from the data as well as other business decisions such as accounting.

No program comes close to doing the stellar work done by cogniview Pdf2xl in the conversion of data from pdf to excel, CSV and word. It should, however, be noted that it costs upwards of one hundred dollars to purchase it but the value far outweighs the cost of acquiring it. 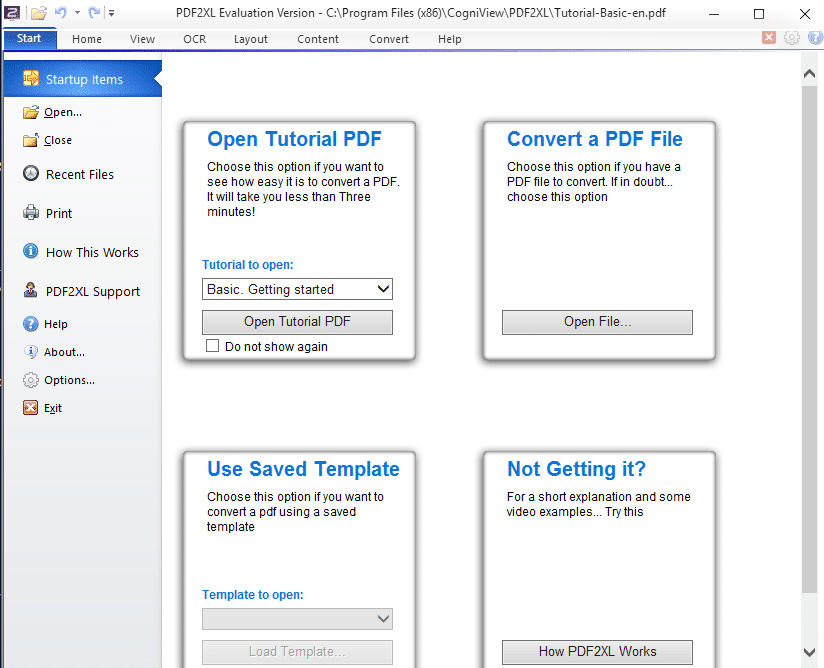 Once cogniview Pdf2xl has been installed and launched, one lands on the start page that contains not only the tutorial but also an option of getting right into it with converting files as well as video tutorials to help newbies.

I learned that using the trial pdf makes it easier to familiarize oneself with the program for future use. However, the conversion process is easy and straightforward since it requires about three steps that include selecting the document and highlighting the portions one would like converted followed by converting the document when using Excel as the output format.

As such, when one opens or uploads a pdf document they would like to convert to excel, the first step in the process is selecting the “By Content” tool found in the Home ribbon in a section called Marking Mode.

Dragging a rectangle from one point of the document to another and hence highlighting the section to be converted follows and the final action in this is selecting the “Convert Document” tool found also in the home ribbon in a section called Conversion.

Before converting, however, one has to ensure that the Conversion Format section is set to excel. The program comes with a preview pane that shows how the converted spreadsheet will look like and this helps one view in advance what they expect.

Furthermore, one can also edit the columns order in the output from the default to one which is more comfortable with regard to the business or enterprise as well as the intended audience. 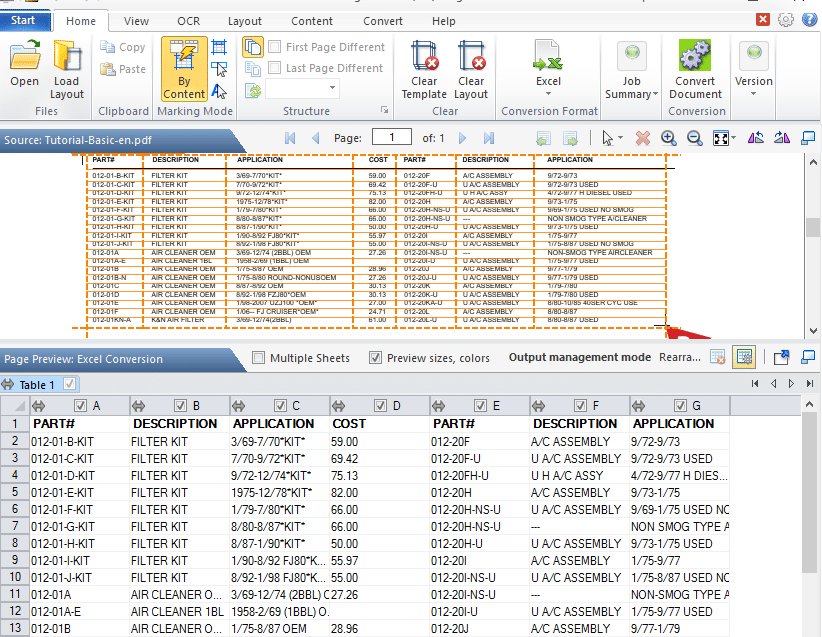 Additionally, there is an option of deciding whether the first and last pages will be different thus aiding in the presentation of the converted document.

In addition to those tools, cogniview Pdf2xl also has a job summary in the home ribbon that allows one to select the number of pages being converted from a particular file as well as the expected outcome in the number of tables that will be the outcome and the rows and columns expected as well.

From this, one can select all the pages or a range of pages for conversion with a preview being provided automatically. This allows one to convert non-tabular data into organized excel tables as well as analyze financial statements thus enable you to understand the data personally.

This is achieved by selecting the structure of the document which gives you additional options for the conversion such as each page being converted differently or similarly as well as settings for the first and last pages.

Tables can also be split or merged during conversion using cogniview Pdf2xl as well as be recognized thus the program has the capability of handling different table formats in a single document.

In addition to converting pdf documents to excel, cogniview Pdf2xl also converts them to Word, PowerPoint, CSV, HTML, and Clipboard. This means that one has the option of converting documents to other formats rather than Excel only.

Batch conversions are also supported with the program being able to reportedly convert up to 500 pages in a single minute. I, however, noted that it takes very few minutes when converting large files regardless of the number uploaded and as such, it serves as one of the fastest pdf converters in the market.

Moreover, this saves also on time since going over the tables and typing such work in excel is not only exhaustive but also unnecessary given such a program exists.

Cogniview Pdf2xl also has OCR which enables the conversion of scanned pdf files easily and accurately without having to retype the data. Therefore, having scanned pdf documents is no longer a worry because such data can be extracted using the optical character recognition software inbuilt in the program for such a purpose.

However, it is worth noting that this version costs a little more than the other version without OCR.however, for people dealing with scanned documents a lot, this may be the best version to use.

In addition to the OCR, cogniview Pdf2xl has a user interface that is available in English, Spanish, German, French, Portuguese, Italian and Dutch this making its access easy regardless of one’s native language. This makes it ideal for people whose first language is not English since they can easily navigate using their local dialect once they land on the home page.

The presentation of data for both public and private use has for the longest time been via an Excel spreadsheet and this has persisted even after the advent of the pdf. In as much as the pdf format may be popular, businesses and institutions still use the former method and as such, cogniview Pdf2xl is the best converter available.

Other than providing a preview of the data, there is the additional option of editing the tables before converting them which leads one to a document they already expect and have an idea on the format. It is also possible to have a standard layout for all pdf documents. These and more make it the best software for converting pdf files to Excel.